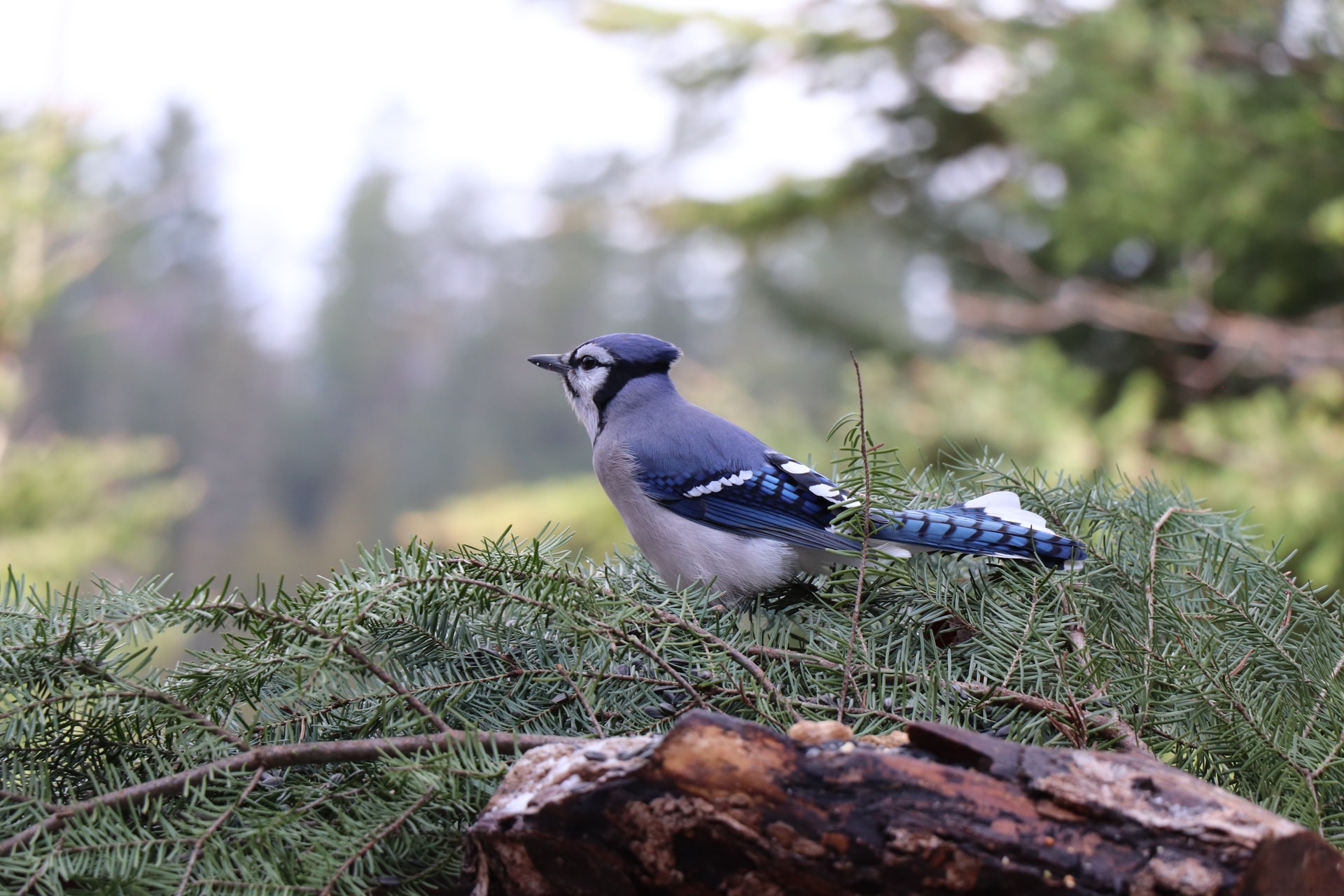 Blue jays are widely known songbirds famous for their perky crests, noisy calls as well as a distinctive blue, black and white plumage.

Known for their intelligence, complex social systems, and close-knit family ties, these beautiful birds have interesting, if not peculiar, migratory trends.

Although significantly smaller than crows, these birds are larger than robins.

They have a wingspan of about 6in (41cm)

Blue jays usually have a brilliant blue color above and white/light gray below.

They have a bold black necklace and wings spangled with white.

Their tails are broad, rounded with white corners that are prominent in flight.

Fun Fact: Blue jay feathers actually contain brown melanin. However, they appear blue because the feather barbs have modified cells that scatter light in a way that gives them a blue hue.

The blue jay is an excellent imitator of calls from other birds. Itself, however, makes a rather harsh screaming call that sounds like “jay-jay!”

The jays mostly make calls when perched in a tree. Otherwise, it flies silently across open areas.

The blue jay is quite the versatile feeder. They can also store food in a throat pouch to cache somewhere else.

Being a true omnivorous bird, it eats almost anything they are, in fact, known to occasionally raid the nests of other smaller birds for nestlings or eggs.

Nevertheless, blue jays are quite fond of oak tree acorns. The jay’s fondness for acorns is historically credited with helping the oak tree spread to new locations after the last glacial period.

When eating, they hold a nut or seed securely between their feet and use their beaks to peck it open.

Blue jays are tenants of forest and woodland edges.

It’s native to mixed woodlands and the eastern deciduous conifers but often be found near oak trees.

After the breeding season ends, in late summer or early fall, blue jays may migrate along the Atlantic coasts and Great Lakes to winter in more southern locations

Are We There Yet? Fun Facts About The Blue Jay Migration

To The Skies and Beyond: An Odyssey of The Blue Jay Migration

Many bird watchers, zoologists, and researchers have attempted to describe the blue jay’s migratory behavior. Several interesting facts have stood out about the migratory pattern of this noisy, showy, well-known bird.

Blue jays may migrate individually, in family groups, or in flocks of as many as 250 birds.

In the United States, they migrate southwestward in the fall. They leave from around the third week of September till mid-October to winter in more southern locations. In spring they migrate northeastward to move back to their nesting localities. They come back in late March and April.

Migrating blue jays start their journey by 7 am. The birds fly silently keeping just above the treetops. At times, the entire flock alights on trees for a moment of rest. Their flights terminate by mid-afternoon.

Is It Worth It? Why Do Blue Jays Migrate?

For most birds, migration is not a conscious choice. They do not undertake those remarkable migratory journeys to start new jobs, escape political persecution, or for the sheer enjoyment of experiencing new ‘vacay’ places.

Migration is rather an instinctive adaptation that ensures the survival of a species. Any bird with this adaptation is thus compelled to set forth when the instinct kicks in. And, the two primary drivers of this instinct are food and reproduction.

Blue jays migrate from their breeding zones in summer and fall when food is supposedly abundant. Concurrently, some jays show migratory behavior but others don’t. Therefore, we can rightly assume that blue jay migration doesn’t result from food shortages.

The motivation to migrate among the blue jays seems to come from within individual birds. This happens in line with an innate tendency among birds to move away after the nesting season.

The most spectacular blue jay migrations happen along the Great Lakes. Large flocks may also be seen along the Atlantic coast.

US states of Ohio, New York, Pennsylvania, Wisconsin, Illinois, Michigan, and Indiana as well as the Canadian province of Ontario are some of the best places to witness blue jays on migration.

Every year, people witness thousands of blue jays along the shore of Lake Erie during their spring migration. The migration can also be spotted along Lake Ontario.

In Avon Lake, bird watchers say that the flocks of beautiful jays on migration make such a spectacular scene that looks as though they might be heading to a blue jay convention.

Which Places Do Blue Jays Prefer to Nest?

Nest building starts in March and peaks in April. Ordinarily, the female lays between 3 and 6 eggs.

Do All Blue Jays Migrate?

Some blue jays migrate, others don’t. Even more fascinating is that an individual may might one year but stay put the next.

How Far Do Blue Jays Migrate?

When blue jays migrate, they only travel a few hundred miles.

Do Blue Jays Migrate in Summer?

During summer the blue jays that had migrated away from their breeding grounds return to their nest. They arrive starting from late March to April.

Do Blue Jays Migrate in Winter?

Some blue jays migrate during winter.

Those that don’t, grow additional feathers before the cold hits. During winter, they’ll survive by eating nuts, seeds, berries, and acorns. At night, they sleep in dense vegetation, deep within the branches of the evergreens to keep themselves warm.

So, do blue jays migrate? Some do, others don’t. However, the true reason why some choose to take to the skies while others decide to stay put remains unknown.