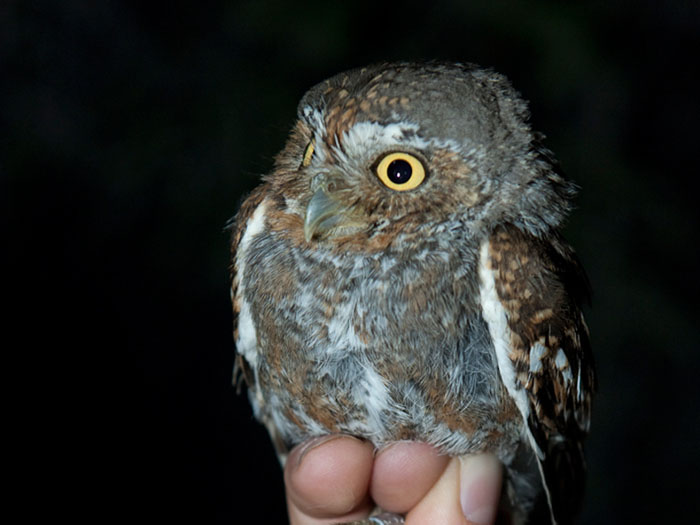 There are very few people who do not like to look at the picture of an owl. Owls are birds that are charming and attractive. Their adorable looks can be attributed to their uniquely round faces. Their bodies also look really soft and fluffy making them look so mesmerizing. The mystical beauty of baby owls cannot be described in words. It has to be seen to be believed.

As with all other animals, there are various types of owls also. To be more precise, there are around an astonishing 250 types of owls. However, if we rate them according to their charm, there are some that make it to the top 15. This article lists out the top 15 owls that look the best.

16 Cute Owls That You Need To Look

Let us begin with the smallest of the lot, the Elf owl. Their size is unbelievable as they are just as big as a little sparrow. However, do not underestimate their looks as they are amazingly beautiful. They generally inhabit the Mexican border.

Their weight is just around 1.4 oz(50 gm). To give you an idea of how much this is, it does not even equal the weight of 2 slices of bread! As mentioned earlier, they are as tiny as about 5 inches in length. They are so small that you can easily hold them in the palm of your hand comfortably.

The beauty of the Boreal Owl is painted in black and white all over its body. Owls are generally nocturnal and so this owl also can be spotted only at night. Search for them in the forests of North America and Europe if you want to spot them.

They are not very noisy and they glide around the forest. The courting habit of these owls needs a special mention as it is unbelievably amazing. The male owl has a special way of courting the female and winning her. He actually courts her by bringing her food. And this is not just for a short period but for a full 3 months before nesting. How interesting is that?

These birds are also not at all large and after they are fully grown also, they are only about the size of a robin. Nature has designed the male of this species to be smaller than the female. The female is double the size of the male.

Owls in general have big faces and these owls are no exception. They have big faces which are white. The whole white face is surrounded by a black border. This black border over the eyes resembles eyebrows and that too, thick eyebrows at that! This makes them look more gorgeous than ever.

This adorable owl is tiny but has legs that are really long. It is not only the appearance that makes this owl adorable. It is very amusing to see it running around and hiding underground.

For an owl with such long legs, we would probably expect a big head. However, their heads are flat. The combination of long legs and a flat head actually makes them look a little funny.

The bird itself is not at all big and cannot compete even with a crow in size. The places they live in include the western US, Mexico, Florida, and the Caribbean.

It is no wonder that this owl of Harry Potter fame has made it to the top 15 best-looking owls! The colors that create the magical beauty of the owl are magnificent. These owls have adorable feet that are soft are covered with fluffy feathers.

Since they are birds that live in cold places, they need to keep themselves warm and this is done very efficiently by their thick feathers. These feathers make them look lovable and huggable, but beware! They are not as cuddly as they look. They are powerful birds of prey that can actually consume 1600 lemming annually.

The places that you can find them in are Canada, Alaska, and sparingly in the northern US states.

The Southern White-faced owl is unique in appearance. It has feathers hanging over its beak and covering it partly. This makes it look like the owl has a mustache! Needless to say, it gives the owl a very interesting look. This is not the only beautifying feature of their face. They have tufts of hair in the ear also. They also have distinct white face discs. The outlines of the beak are covered in feathers.

They are native to Africa. They measure about 10 inches in length (12 cm)

Flammulated owls are not very large. In fact, they are tiny owls and this makes them really cute. What adds to their beauty is their eye, which, unlike their bodies, are quite big. These big, black eyes looking out of small perfectly round heads melt our hearts. On the whole, they are only a little bigger than sparrows. The description will make any bird watcher want to see them. But this is rather tough because these birds are too small to be spotted easily. Another reason is that they prefer to stick around treetops almost always.

Their breeding spot is western US states. They head towards Mexico and Central America during the winter.

The Spotted Owlet (Athene brama) is a small owl found in the Indian subcontinent. It is resident in open woodland and cultivation. They are usually seen perched on a tree trunk or a branch, often near a water body. The Spotted Owlet is around 15 cm in length and has a wingspan of about 36 cm. It is a pale brown owl with black spots on the head and chest.

These owls owe most of their charm to their size. They are really small and measure about 8 inches in length. That is only about 20 cm! Their rounded and fluffy look only adds to their attractiveness to a large extent.

What is the first thing that strikes you as soon as you see the picture of this crested owl? The answer to this question is bound to be the charming ear tufts that stand out and give their own distinct look. Doesn’t he look really wise? The other striking thing about this owl is the color contrast in the body. It is a soothing buff color but the tufts are conspicuous as they are white. This draws a lot more attention to their cute heads.

Where do we spot these captivating birds? They live in Central and South America and are considered to be one of the best-looking owls around.

The specialty and the most remarkable feature of this owl is its face disc. The lovely face disc is actually shaped like a heart! Imagine this with a set of black, piercing eyes and you have the barn owl staring at you. They are exquisite birds that can win over your hearts at first sight.

Fortunately for those who are eager to see them, they are pretty common and can be found in all places with the exception of the polar and the desert areas.

These birds are all 8 inches in length. This means that they are just about 20 cm. They are native to India and their staple diet is insects. Their rounded appearance makes them really adorable. The presence of ear tufts usually gives the heads of owls a very different shape. However, ear tufts are absent in this species and this very absence makes their heads look tiny and alluring.

If there is a competition between the cuteness factor of big and tiny owls, the tiny owls will win hands down. What about the cutest of the tiny owls then? They are bound to win our hearts immediately. We are talking about the Pygmy Owl, which is easily the most alluring of the tiny owls. What makes them so charming? Since they are small, round, and fluffy, they look irresistible.

They are really tiny and surprisingly, they are only about 6.5 inches in length. That works out to about 17 cm long. Their weight is also very less. They only weigh 2 oz or 60 gms. Can you believe that that is the weight of a tennis ball?

The contrast and play of colors in the owl make it one of the most stunning owls. Their faces are actually dark and round and they are made to stand out more prominently by their white feathers. This contributes to their breathtaking looks. Their dark heads are also contrasted by their bellies that are white.

These owls are native to Central and South America. These owls do not fall under the category of small tiny owls. They are pretty big and measure up to 20 inches or 50 cms.

The distinctive features that contribute to the magnificence of this owl are the big face discs that are not very brightly colored and the intense black eyes. The shape of the head is round and the design on the body is made out of mottled brown and white. These features are no less in adding to the stunning looks of the bird.

These birds are native to northern Europe and northern Asia. They live in the forests in these places.

The Eastern screech owl is a small owl that is found in eastern North America. It is the most common owl in the eastern United States. The Eastern screech owl is a nocturnal bird and feeds on small animals such as mice, rats, and snakes. It also eats insects and other small invertebrates. This owl nests in hollow trees or in abandoned buildings. This attractive, thickset owl is only the size of a robin. It merges with the background as its color resembles the color of the tree bark. It is a native of the eastern US states.

As the name itself indicates, this is a small owl but it is definitely not the tiniest as it is about 8 inches or 20 cm. It has a flat head and that adds to its beauty to a large extent.

They are native to Europe, Asia, and North Africa.