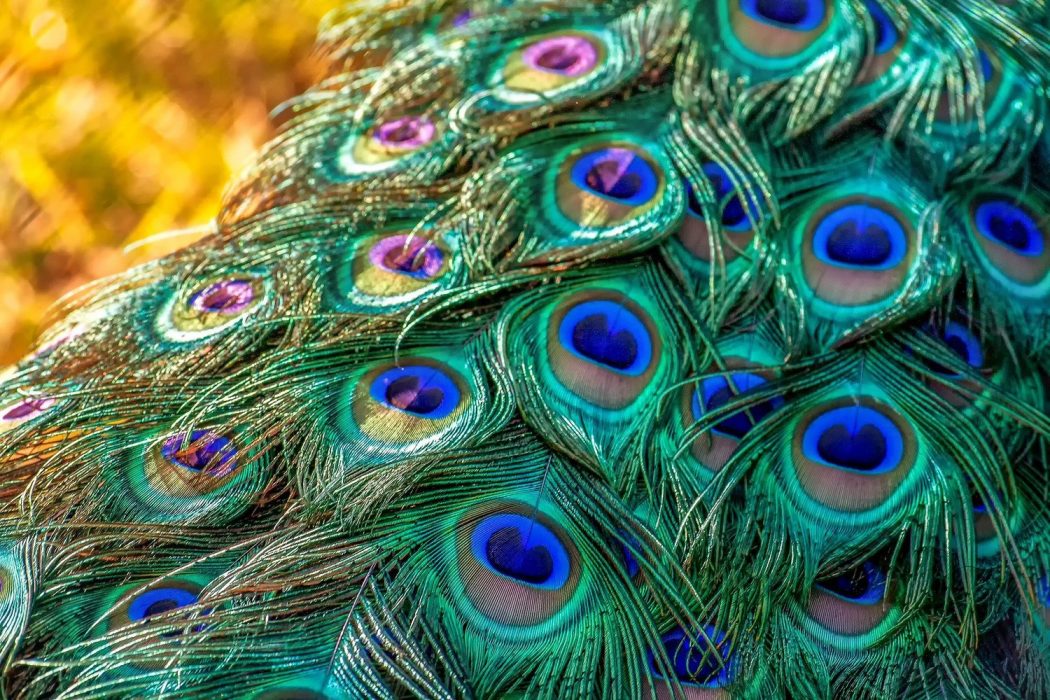 What comes to our minds when we hear the name peacock? Iridescent feathers, a long tail that can flare up like a fan are the first things that come to our minds. When they are spotted, people wait for a long time to catch just one glimpse of them dancing for it is such a heavenly sight. How beautiful will it be to see this bird flying? Wait! Can they fly? This article will answer this question.

Before we get into the details of these birds flying, let us first look at where they live. They live comfortably in woodland and forests by nature. However, they are birds that can adjust very well to new surroundings also.

They live as wild birds in India, Sri Lanka, Southeast Asia, and the Congo Basin. Though they are found only in these places naturally, the beauty of the bird tempted people to bring them into their own countries and so they are now widespread and can be found in almost all continents.

The peacock is mostly found strutting around on the ground and people normally are of the opinion that they cannot fly. But, what would prompt people to think this way? The first reason is that we normally see them on the ground only.

Do you think that Peacocks Can Fly?

All this discussion brings us to the real question of whether these birds can truly fly or not. Well, the answer is that they can fly but only for short distances. They do not fly very often too and so, observation has revealed that they spend only as little as 2 percent of their time flying. These flights are also only for very short distances. For instance, they fly from the feeding sites to their roosting places which are a little high up on trees.

The impression that big birds find it difficult to fly is not all wrong and the peacock is a big bird. So, when it flies, in reality, it actually jumps up really high and then starts beating its wings rapidly. With this effort, it takes off and reaches branches of trees where it perches and spends some time. When there is a need to come back to the ground, it simply glides down to the ground.

Peacocks are birds that spend a lot of time looking for food which is mainly insects. Since these insects are found in the ground, there is really no need for the peacock to leave the ground throughout the day. It is only at night, when they need to roost, that they go up the trees. This also ensures that predators don’t get at them when they are resting.

When peacocks jump up from the ground and flap their wings rapidly, is results in a vertical movement that takes them up, unlike many other birds. They can definitely fly but they fly only when necessary.

How important are the wings for the peacock to jump off the ground? Well, even if we cut off their wings, or trim their wings, they are capable of jumping up to 8 feet from the ground.

The elegant and exquisite looks of the peacock only increase when it glides back gracefully into the ground. The lengthy attractive tail feathers that trail behind it are a sight to behold.

You can watch the video to see the amount of effort it takes for the peacock to fly onto the roof.

Do you think that Female Peacocks Can Fly?

There is a common name for both the genders of this species and it is peafowl. The females of the species are called peahens and the males go by the name of the peacock.

The flying habits of both genders are the same. Just like the male with the long tail feathers, the female also flies up to the trees for a good night’s rest, safely away from predators. However, since the food habits of both the genders are also the same, the peahens also spend most of their time on the ground looking for their food, namely insects.

The main difference between the male and the female of the species is that the females lack the colorful, beautiful tail feathers that the males are proud of. They are also not as large as their counterparts. This may make us think that because of their smaller size, they may be capable of longer flights. However, they also do not fly too high or too far.

When animals or birds are found in clusters or groups, we have a separate name for them and the collective noun for the peacock is a muster.

Now, let us look at how they divide themselves into groups. They normally form clusters with one single male and 3 to 5 females during the breeding season. Apart from this arrangement, their clusters normally consist of peahens and their baby chicks which are called peachicks.

How Much Far Peacocks Can Fly ?

The magnificent peacock belongs to the family of Phasianidae. Other birds that are classified under this family are chickens, turkeys, junglefowl, pheasants, partridges, and quail. These are all birds that are huge and heavy. They have the same characteristics such as living mostly on the ground.

Like the peacock, the other birds in this family are also really heavy and so, none of them fly too high or too far. To compensate for this, all of them have extremely robust legs which make them great runners.

There is not much study into the distance that peacocks can actually fly. But those who grow peacocks have observed that they are competent enough to fly as far as a mile.

When they fly up to perch on branches, peacocks look for a high place. This is very helpful for them when they want to come back to the ground. They use this high perch as a launchpad when they want to come down again. From these high perches, they launch themselves and glide down elegantly. All they have to do to sustain the flight is to flap their wings a few times.

Why do Peacocks Fly?

Though peacocks are mainly ground birds, they do have the need to fly. The reason for this need is that they have to keep themselves safe from their enemies. This is very important when they rest on top of tree trunks during the night. They also need to be able to move short distances to source their food.

Which are the predators that the peacocks have to safeguard themselves from? The list of their predators includes animals like the leopard, tiger, mongoose, and even stray dogs. They are attacked by these predators in the places that they are native to like India, Sri Lanka, Burma, and Java.

Since these are mostly ground animals, perching up a tree helps the peacock to hide from them. However, these predators can actually climb up the trees to get at them. Fortunately for the peacock, they cannot do this silently. So, if there is a predator coming for them up the tree, the sound alerts the peacock and it quickly flies away to another tree.

The daytime is the time that peacocks can find food and so they spend most of this time searching for food. However, they do not do this only in a single area. They do fly small distances to look for insects and also for other tasty food.

Peacocks are not finicky or picky when it comes to their food. They eat a large variety of things such as insects, seeds, reptiles, and amphibians. Do not get fooled by their dainty-looking feet.

These feet are strong and are apt for scraping through piles of leaves and are even capable of killing snakes like the cobra. There are birds that feed on flying insects and these birds have to fly and catch their prey mid-flight.

However, the peacock eats insects like ants, termites, crickets, and millipedes. Since these insects are all found on the ground, there is no need for the peacock to fly and catch its prey. Instead, it scrapes through leaves and the mud when it is not very hot.

Do You Think that Peacocks Can Migrate?

They are Asian birds that live in woodland and forests and they mainly exist on insects and seeds. The woodlands and forests that they live in provide them with their diet and everything else they need. So, they do not migrate.

The family of birds that the peacock belongs to is a family that consists of relatively huge birds which are also heavy. These birds are only capable of short flights and definitely cannot fly long enough to migrate.

This does not mean that the peacock cannot move long distances. In fact, it can cover several miles in a day as it goes looking for food. But it depends on its powerful legs to cover this distance.

Although they are not migratory birds, man has interfered and has introduced them in many countries of the world. So, they have become quite common in these countries and live in the wild there.

Steps to Stop a Peacock Flying Away From You

Some people clip the wings of the peacock to make them stay at home. However, this is not completely effective as the peacock can still get away by jumping up. It can jump up to 8 feet up from the ground without its wings. So, the best thing to do is to put up a fence around the place you want them to be in so that they do not jump and go away looking for food. However, they need to be provided places higher from the ground so that they can roost there at night.

There is another way to keep peacocks from going away. If they are restricted to an enclosure for a couple of weeks and then allowed to be free, they identify the place as their house, and even if they go somewhere, they will return home provided they are given food every day.

This process sounds really simple but has its own cons. By the time the peacocks learn to identify the place as their own, they visit the houses around. They are birds that can really mess up places and they are very noisy also. This may not go down too well with your neighbors!