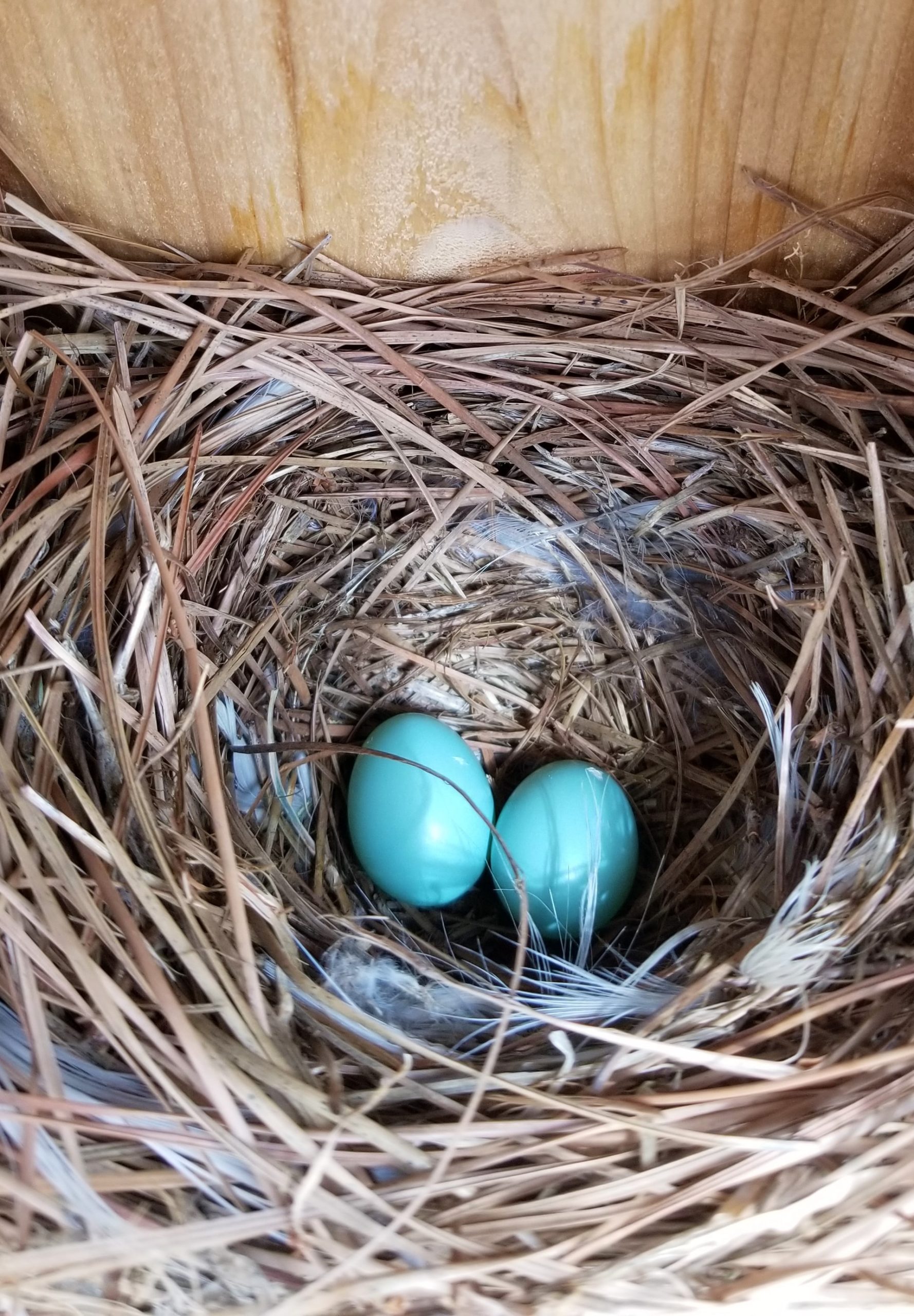 Sparrows are a well-known associate of man in towns as well as suburban and rural landscapes. Being cavity-nesters, house sparrows prefer hole nests. Furthermore, they seem to prefer nesting in the same habitats and locations as bluebirds.

Unfortunately, sparrows can be overly aggressive towards bluebirds. The male sparrow will often attack and kill bluebirds and their nestlings in addition to destroying their eggs.

Bluebird societies across America, therefore, advise that the nesting success of bluebirds may depend on appropriate house sparrow control. Sometimes, a bluebird nest box owner has to remove sparrow nests to protect bluebirds.

So how then can one tell a bluebird’s nest from a sparrow’s?

A bluebird’s nest can be described as a neat, cup-shaped work of art.

On the other hand, a sparrow’s nest is a loose jumble of bits and pieces.

Essentially, a sparrow’s nest is messier than what you’d normally see in a bluebird’s nest.

Bluebird nests are usually cup-shaped. Conversely, sparrows build their nests like a dome that covers the sides of their nesting hole or box.

Sparrows are invasive, non-native bird species that kill bluebirds and destroy their eggs and young ones. Therefore, they receive no legal protection. Their nests can be removed and destroyed to protect bluebirds.

The female bluebirds build a tidy nest using materials readily available around their nesting site. For example, the nest may be woven using dry grasses, bark strips, or pine needles. Occasionally, a bluebird’s nest may contain some feathers and bits of fur or hair, e.g., from horses.

It’s not likely for a bluebird’s nest to contain seed heads. Seed heads are more commonly found in sparrow nests.

The bluebird nest is usually a cylindrical cup. The nest typically measures about 2.5” in diameter and is about 3 to 4 inches deep. The cup of the nest is generally woven more neatly and carefully than the rest of the nest.

The presence of one or more blue eggs (with no spots) may give a stronger indication that you’re looking at a bluebird’s nest.

How To Identify a Sparrow Nest

Sparrow nests are usually tall, bulky, and domed with a tunnel-like entrance. In addition, sparrows tend to construct their nest such that it covers the sides of the nest box/cavity.

A sparrow nest may contain one or more sparrow eggs. The eggs may be white, cream, grey, or greenish tint with fine, irregular, brown speckles.

Note that bluebird and sparrow nests may be indistinguishable from each other during their early stages of construction.

How To Keep Other Birds Out of Bluebird House

Besides sparrows, various species of cavity-nesting birds may readily nest in birdhouses erected for bluebirds. House wrens and swallows, for instance, may take up residence in a bluebird house.

How To Protect Bluebird House from Sparrows

On top of being territorial, sparrows are quite the selfish bunch. The males are particularly nasty bullies who kill adult bluebirds and won’t shy away from destroying bluebird eggs and nestlings.

To protect bluebird houses from sparrow incursions, one may;

Sparrows are a dangerous, tenacious threat to bluebirds. Regular bluebird house monitoring is thus essential to ensure that no sparrows nest and breed inside them. Each sparrow nest that gets built in the box ought to be removed each time they try to rebuild.

Consequently, a bluebird landlord needs to be able to clearly distinguish between a sparrow’s nest and that of a bluebird. And, hopefully, after reading this article, you can tell the two apart.